The most active acquirers in the industry closed additional transactions in the third quarter, as a steady pace of newspaper deals continued in 2015.

New Media Investment Group, Boone Newspapers and Adams Publishing all made acquisitions that complemented their growing portfolios. Sample News Group also added to its Pennsylvania holdings. Many of these transactions involved newspapers that were near other properties they own, providing opportunities to expand clusters of publishing operations.

The steady pace of acquisitions by New Media in 2015 has pushed the company up to $1.3 billion in pro forma annual revenue, which puts it ahead of The McClatchy Co. among the public companies.

In fact, the public companies, after years of sitting on the acquisition sidelines, have accounted for 91 percent of the dollar volume of daily newspaper transactions so far in 2015. This includes acquisitions by New Media, Gannett and Tribune Publishing.

The public companies made a splash in the second quarter, with two making significant additions to their portfolios and a “new” one making its debut in the public markets with a vow to get busy on the acquisition trail. 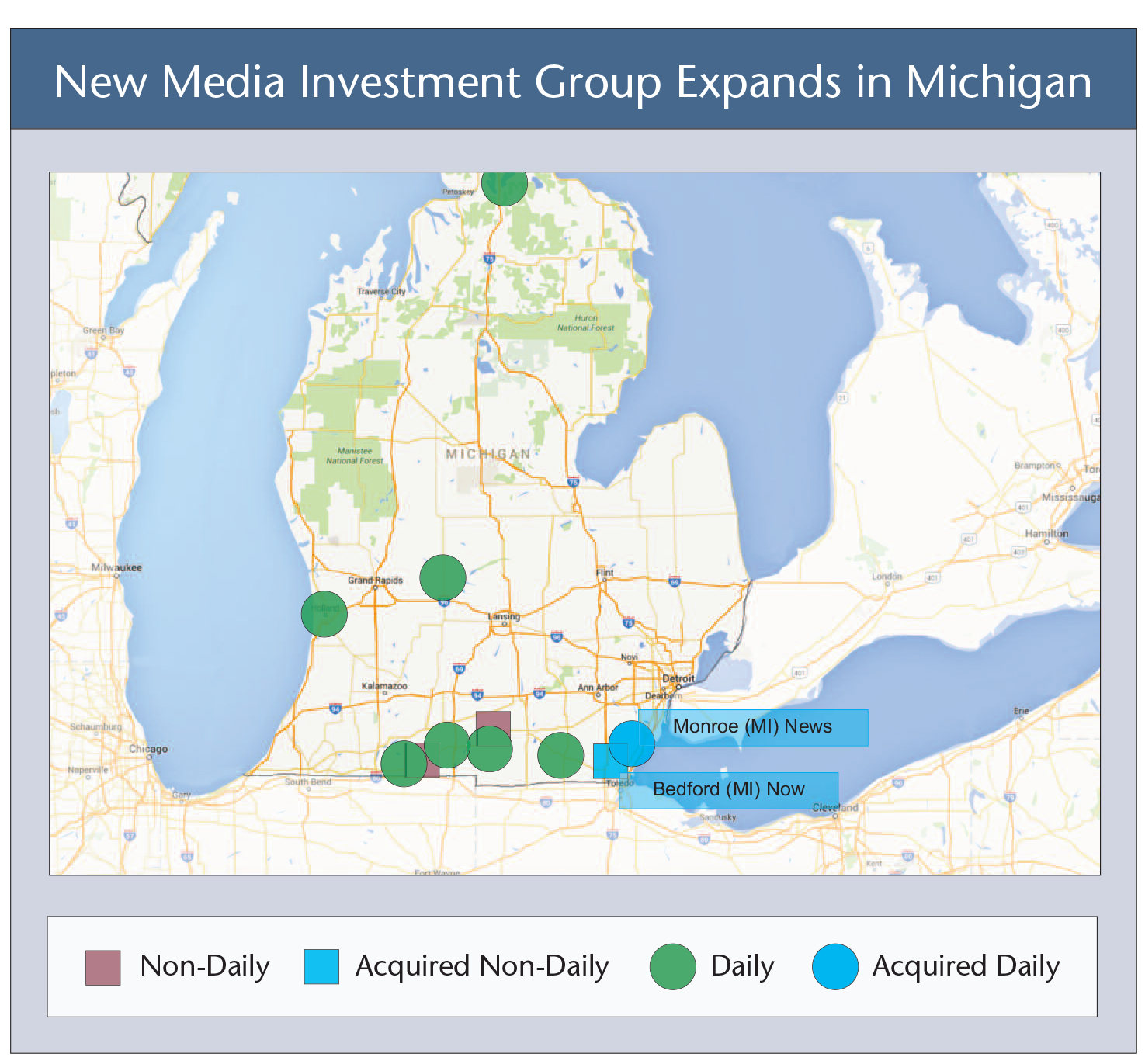 One of few employee-owned publishing operations, the Monroe (MI) News and companion publications, was sold to New Media in late September. The southeastern Michigan group will supplement New Media’s presence along the southern tier of the state.

The Monroe News, with 14,000 circulation daily and 21,000 on Sunday, had been owned by its employees since 1994. Previously it had been owned by the Gray family, which acquired it in 1927. Family member Steve Gray had remained chairman of the employee-owned company.

In addition to the daily, the transaction included Bedford Now, a weekly community newspaper; 20 Creative, a design and marketing firm; and Global Digital Printing, a specialty printing company. 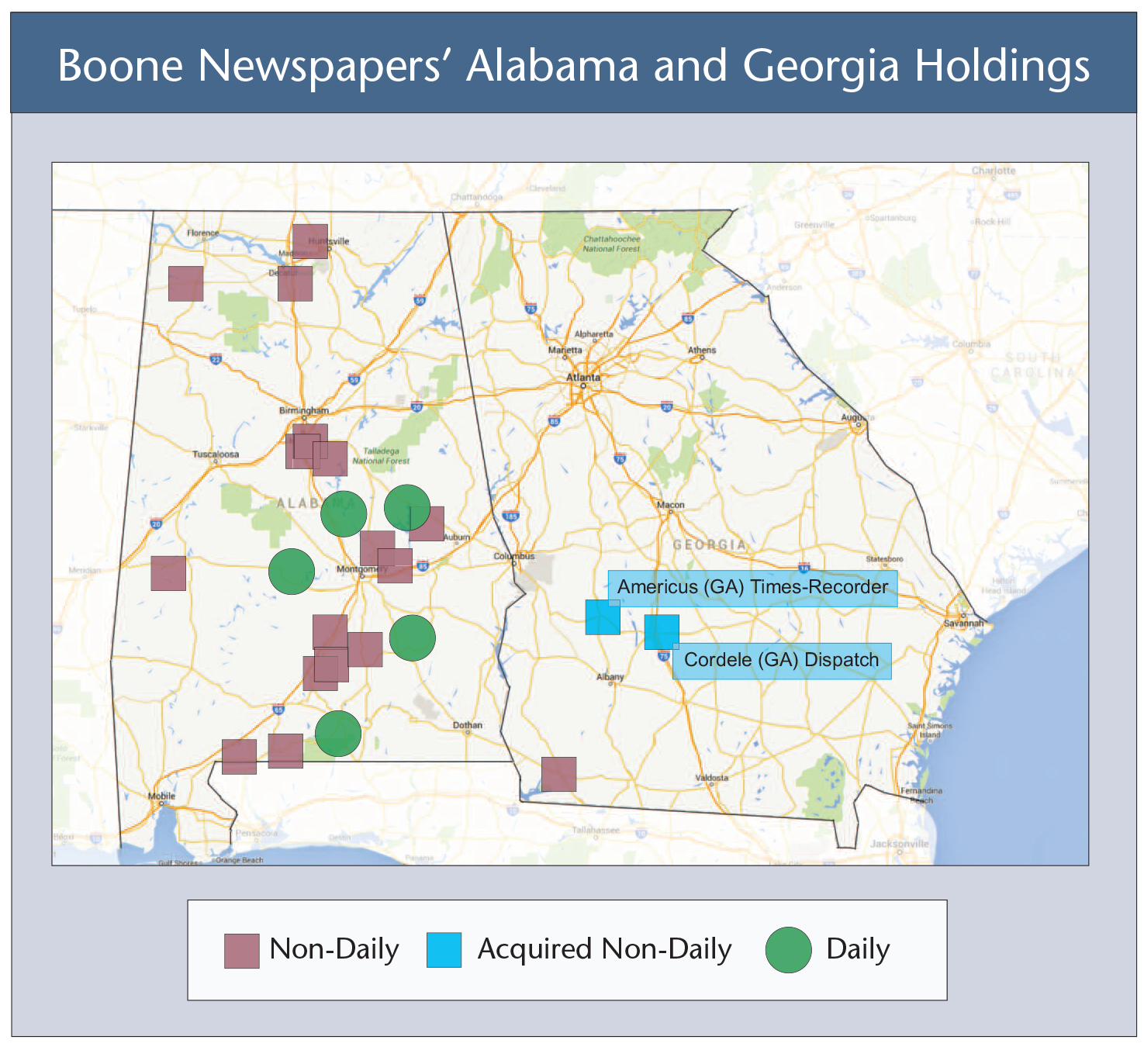 Boone got the 3,000-circulation Americus Times-Recorder and the 4,000-circulation Cordele Dispatch in the deal. CNHI had owned the newspapers since 2000, when it picked them up in a larger transaction with Thomson Newspapers.

Boone also owns the Bainbridge (GA) Post-Searchlight, which the company acquired from family owners in 2008. Following the acquisition, Boone increased the frequency of both the Cordele and Americus newspapers.

Separately, Boone bought the Frankfort (KY) State Journal from Dix Communications. Dix had owned the paper since 1962. Dix will continue to own newspapers in Ohio.

Sample Gets More in PA
Scoop Sample expanded his holdings in northeastern Pennsylvania and south-central New York with the acquisition of Towanda Printing Co. from the Lynett family.

The Lynett family’s Times-Shamrock Communications, based in Scranton, had owned Towanda Printing since 1977. Times-Shamrock continues to own newspapers in eastern Pennsylvania, as well as a number of radio stations.

Other News
Japanese media group Nikkei acquired the FT Group, which includes the Financial Times, for $1.3 billion. The Financial Times parent company, Pearson, will focus on its educational publishing operations.­­

Adams Publishing Group added to their holdings with the purchase of the daily newspapers in Cheyenne, Laramie, Rawlins and Rock Springs, Wyoming, from the McCracken and Richardson families.