Berkshire leads the way in 2013

All of them serve growing regional markets; and, in two of the deals, the acquisition represents the company’s entry into that state.

The sale of newspapers by longtime family owners was something of a theme in the first part of 2013.

In addition to those bought by BH Media, independent owners in Baton Rouge, Louisiana and Vicksburg, Mississippi sold their daily newspapers to new owners.

Act 1: On the Boardwalk
Making its first foray in New Jersey, BH Media agreed to acquire the Press of Atlantic City, a 67,000-circulation daily serving a large market area in the southern portion of that state.

The Press has been owned by ABARTA, a family-owned holding company based in Pittsburgh. ABARTA’s other holdings include Coca-Cola bottling and oil and gas interests. Members of the family that owns ABARTA have owned the Press for three generations.

Mark Blum, currently the publisher of the Morning News in Florence, South Carolina, has been named publisher and will assume that role when BH Media takes ownership. Blum was controller of The Press of Atlantic City from 1989 to 1993.

The market served by the newspaper includes dozens of cities and townships, far beyond the casino/resort area most often associated with Atlantic City.

Both newspapers – the Roanoke (VA) Times and the Greensboro (NC) News & Record – fit nicely into the footprint of newspapers acquired from Media General in 2011.

The 76,000-circulation Roanoke Times serves a large regional market in southwestern Virginia that includes Virginia Tech, the state’s largest university. The 58,000-circulation News & Record is the third largest newspaper in North Carolina and is home to several large universities.

Landmark had owned the two newspapers since the 1960s. The company still owns a number of daily and weekly newspapers, principally in the Southeast. 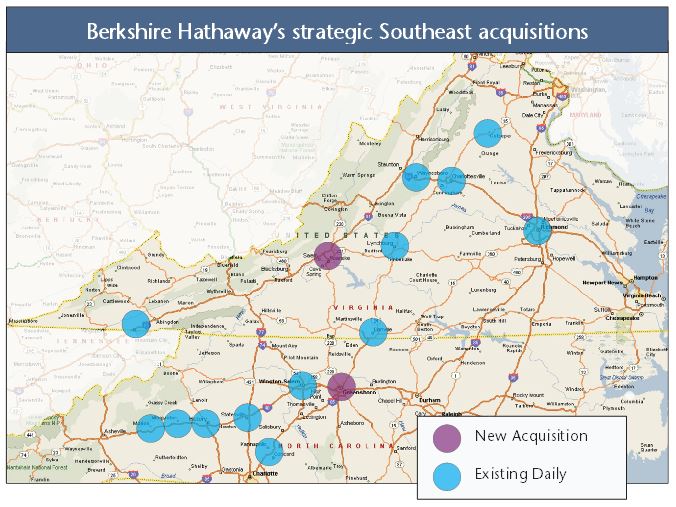 BH Media also added the 95,000-circulation Tulsa (OK) World to the fold. The World became the third largest newspaper owned by BH Media, after the Omaha (NE) World-Herald and the Richmond (VA) Times-Dispatch.

The World had been owned by the Lorton family since 1917. Publisher Robert E. Lorton III was the fourth generation of his family to run the regional newspaper.

Eugene Lorton arrived to edit the newspaper in 1911 just as the population of the city was about to boom from the Cushing and Osage oil fields. He eventually acquired a part interest and bought out his partner to become sole owner.

Talking to the staff of the newspaper following the announcement, BH Media CEO Terry Kroeger said: “Things that we find in an Omaha or a Tulsa or a Richmond or, for that matter, a College Station, tend to have something to rally around locally.”

Freedom Focus on OC
The new owner of Freedom Communications’ western newspapers continued to pare the portfolio in the first half of 2013.

Following the sale of three dailies in two separate transactions, Freedom now is the publisher of the flagship Orange County Register and nearby operations in Victorville and Barstow.

Black, through its Sound Publishing division in the Pacific Northwest, bought the Everett (WA) Daily Herald from the Washington Post. The Washington Post had owned the 46,000-circulation daily for 35 years.

Sound Publishing owns 57 newspaper and shopper titles in Washington and Oregon, with combined print circulation of nearly 900,000. Much of the circulation is in the Puget Sound region around Seattle and Everett.

Separately, Black’s Oahu Publications, owner of the Honolulu Star-Advertiser, added the Kauai Garden Island from Lee Enterprises. Lee got the 9,500-circulation Garden Island in its 2005 acquisition of Pulitzer.

David Black got a foothold in Hawaii when he bought the Honolulu Star-Bulletin in 2000. He later added Gannett’s Advertiser and consolidated the city’s newspapers. The Garden Island will be printed in Honolulu and flown over daily for distribution.

And a Side of Newsprint
John Georges, a Louisiana entrepreneur who recently acquired New Orleans’ famed Galatoire’s restaurant, bought the Baton Rouge (LA) Advocate from the Manship family, the longtime owners of the capital city newspaper.

Georges built his family’s small grocery delivery business into a major player in the industry, with estimated sales of $1 billion annually. Georges also has made unsuccessful runs for governor of Louisiana and mayor of New Orleans.

Georges named two veteran Louisiana journalists as senior executives of the Advocate. Both had been senior newsroom executives at the New Orleans Times-Picayune, but left in 2012 when the New Orleans newspaper ceased daily print publication.

The Manship family had owned the Advocate since 1909. The family also owns the ABC affiliate television station in Baton Rouge, which was not part of the sale.

More in Mississippi
Boone Newspapers expanded their holdings in Mississippi with the addition of the Vicksburg Post. Affiliates of Boone also own the Natchez Democrat (south of Vicksburg along the Mississippi River) and Brookhaven Daily Leader to the east.

The Vicksburg Post had been owned by the Cashman family for 130 years. Publisher Louis P. ‘Pat” Cashman III is the great-grandson of John Gordon Cashman, who founded the Vicksburg Evening Post in 1883.

Champion had bought the newspaper from GateHouse Media, which had gotten the Herald-Dispatch in a larger package of newspapers acquired from Gannett earlier in 2007.

Champion reported the purchase price at $10 million, and the transaction was approved by the company’s board. Champion is a Huntington-based, publicly traded commercial printing company and business form manufacturer.