The sales of the Washington Post and the Boston Globe highlighted the 3rd quarter activity. The combined $320 million aggregate value of the deals represents almost half the total dollar volume of newspaper transactions thus far in 2013.

The Washington Post is the 7th largest circulation daily in the country, with 671,000 Sunday circulation, and the Boston Globe is the 22nd largest with 363,000. Both papers were acquired by individuals who were buying their first newspapers.

Other transactions in the quarter included the sale of the Harte-Hanks shopper group in California (see page 3), Aaron Kushner expanding in southern California and Halifax Media’s addition in Florida.

Many in Boston are asking, how much does John Henry know? Henry, principal owner of the Boston Red Sox, agreed in August to buy the Boston Globe and other publications from the New York Times Co. for $70 million.

Henry is part of a small but growing trend of newspapers returning to local ownership. Local leaders seemed to welcome the deal, hoping that Henry’s business acumen combined with his proven concern for the area and his investment in the market will strengthen the newspaper.

The Boston Globe was acquired by the New York Times in 1993 for $1.1 billion from Affiliated Publications – the first single newspaper to ever to break the $1 billion price tag. Six years later in 1999, the Times then paid $295 million for the nearby Worcester Telegram & Gazette, which was also included in the $70 million sale to Henry.

Along with the enthusiasm about Henry’s purchase, there are some who have raised concerns on how the Boston Globe will now cover his hometown Red Sox. This situation is certainly not a first in Boston, or in other parts of the country where a media company has owned a professional sports franchise both operating in the same city. Some examples:

Bezos, best known as a technology pioneer and founder and CEO of Amazon, now finds himself owning a newspaper for the first time. The Washington Post is generating in excess of $500 million in annual revenue, but losing money according to public filings. The newspaper last changed hands in 1933 when Eugene Meyer bought it in a bankruptcy auction for $825,000.

The 49-year-old Bezos was born one year before famed executive editor Benjamin Bradlee took control of the newsroom of the Washington Post.

The head of the world’s largest retailer made it clear that his purchase was a personal investment and not connected in any way to Amazon. He said he had “no map” for the operation and implied that because of his financial strength he would be able to test some new concepts.

The publicly traded Washington Post Co. retained its television and educational operations. Shares of the Washington Post closed at $628 on October 1, the day of the closing of the transaction, up 16.3% from the day before the announcement of a sale.

Kushner acquired Freedom’s western newspapers and the corporation in 2012. He has since sold several of the former Freedom newspapers, leaving him with a core group south and east of Los Angeles. 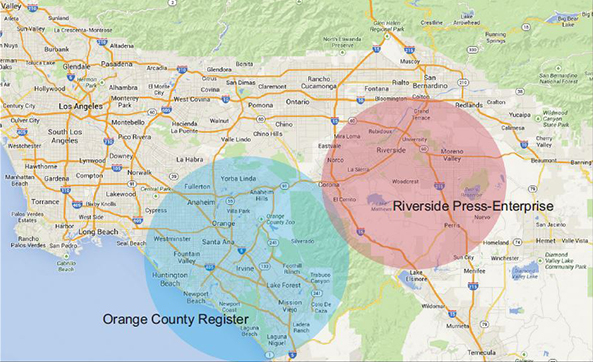 Belo had owned the Press-Enterprise since 1997, when it bought out the remaining interest in it. Prior to that, it had owned a 38% interest in the newspaper. Belo still owns the Dallas (TX) Morning News, Providence (RI) Journal and other publications.

News Corp. to Newcastle
Dow Jones Local Media Group, better known to most reading this as the Ottaway Newspapers, was sold by News Corp. to Newcastle Investment Corp. in an $82 million transaction. The group consists of eight dailies and a number of non-daily publications in seven states.

Newcastle has entered into an agreement with other lenders to restructure GateHouse in a pre-packaged bankruptcy, which has been filed. Newcastle is considering a spin-off of GateHouse and the former Dow Jones newspapers into a separate publicly traded company dubbed “New Media.”

The former Dow Jones newspapers acquired were the final papers once owned by Ottaway Newspapers. Ottaway merged with Dow Jones in 1970, but operated somewhat autonomously from Dow Jones. Dow Jones was acquired by News Corp. in 2007.

The Ottaway business was founded by James H. Ottaway in 1936, when he bought the Endicott (NY) Bulletin. His son James H. “Jimmy” Ottaway , Jr. continued to build the community newspaper division after the merger to the point where it was one of the 20 largest newspaper companies in the country, with 23 dailies and more than 500,000 daily circulation. Dow Jones began a divestiture of some of the portfolio prior to its merger with News Corp.

Leesburg is located just an hour’s drive from Halifax’s News-Journal in Daytona Beach and Star-Banner in Ocala. It fills out a circulation footprint in north central Florida stretching more than 100 miles. It also is an operation where Halifax’s CEO, Michael Redding, was publisher at one point in his career.

Other News
Shaw Media acquired a weekly newspaper in Prairie City, Iowa. Shaw owns the nearby Newton (IA) Daily News. The Prairie City News, in existence since 1875, is the oldest continually operating business in the community.