The public companies made a splash in the second quarter, with two making significant additions to their portfolios and a "new" one making its debut in the public markets with a vow to get busy on the acquisition trail.

Gannett became the newest newspaper-centric public company at the end of the quarter, when its publications were spun off into a separate company that retained the Gannett name. Although Gannett was one of the first newspaper concerns to go public in the 1960s, the company had become dominated by broadcast television and digital operations in recent years.

Shortly before the separation, Gannett bought out its partner Digital First Media in 11 daily newspapers in Texas, New Mexico and Pennsylvania.

A New World for Columbus
The Wolfe family ended 110 years of family ownership with the sale of the Columbus Dispatch to New Media. The transaction also included ThisWeek newspapers, a collection of 24 suburban weeklies; and seven magazines, including Columbus Monthly, Columbus CEO and Capital Style.

For New Media, the Dispatch represents the third large daily newspaper it has acquired in the past 12 months. New Media bought the 115,000-circulation Las Vegas Review-Journal earlier this year as part of the Stephens Media deal and the Providence (RI) Journal in 2014.

In a letter to readers, publisher John F. Wolfe cited the “unprecedented speed, breadth and depth of change affecting the newspaper industry” over the past two decades that has “redefined the fundamentals necessary for continued success.”

“Single-city, independent family-owned newspapers – long the traditional model of American journalism – found they lack the economies of scale necessary to adapt in our fast-changing, digitally dominated information marketplace,” Wolfe said in a column published with the sale announcement.

The Wolfe family will continue to own and operate its broadcast television stations in Columbus and Indianapolis and its radio holdings. The family also has a commercial real estate company and farming operations.

New Media is the largest owner of daily newspapers with 127 dailies in 32 states.

SoCal TieUp
Tribune Publishing combined the two largest cities in Southern California – and two of the top 10 in the country – by acquiring U-T San Diego, which will be managed by its Los Angeles Times group.

The $85 million deal is the third time the San Diego newspaper formerly called the Union-Tribune has changed hands since 2009, when the Copley family sold it to Platinum Equity. Platinum sold the newspaper to “Papa” Doug Manchester, a local real estate developer, in 2011.

Manchester also had acquired the neighboring Escondido North County Times from Lee Enterprises in 2012, which was folded into U-T San Diego.

The sale to Tribune Publishing does not include the newspaper’s Mission Valley headquarters building, which Manchester wants to turn into luxury apartments.

Los Angeles Times publisher Austin Beutner restored the name of the daily to the San Diego Union-Tribune, which had been compressed by Manchester, soon after the deal closed. 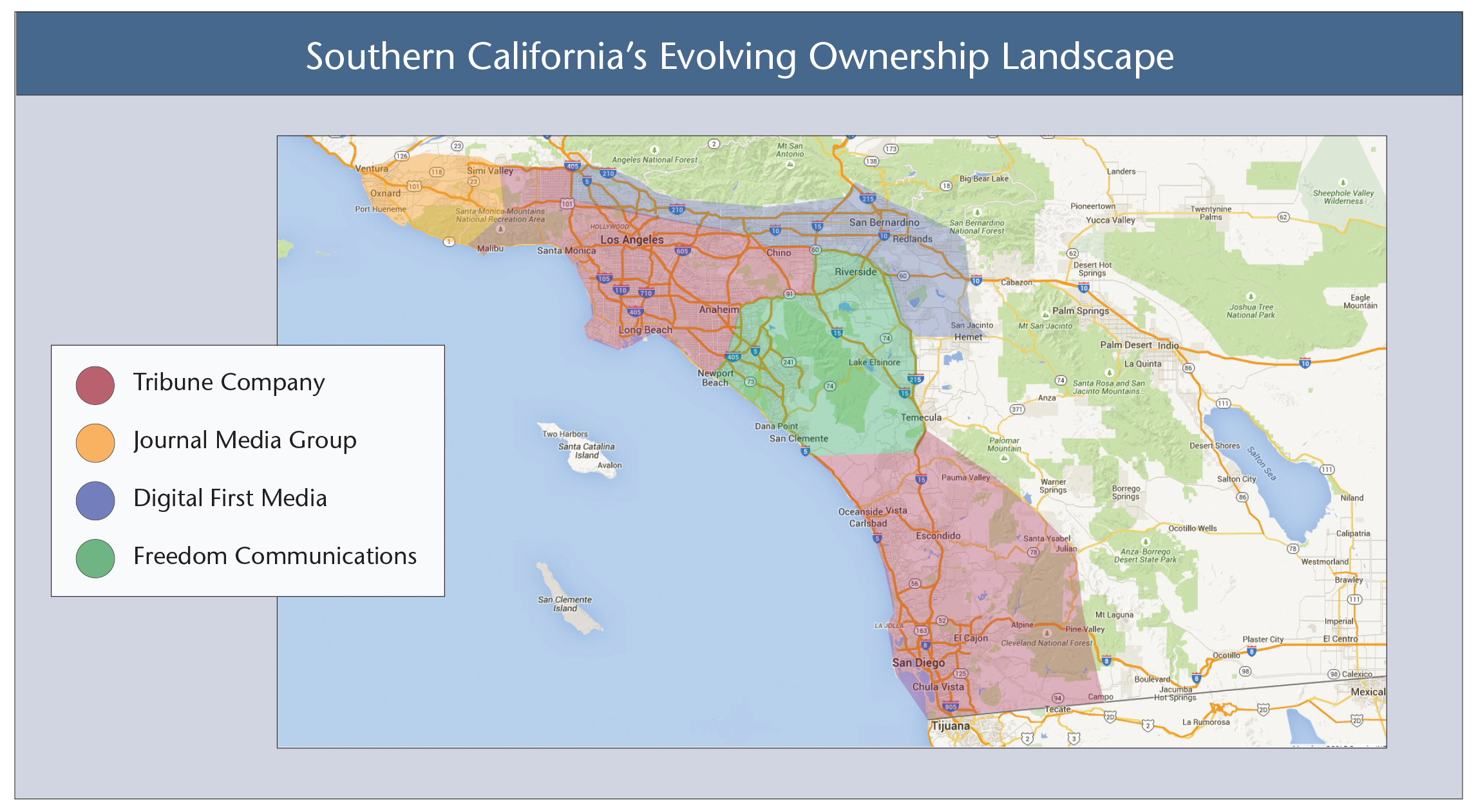 TexMex Cooking
Gannett acquired full ownership of 11 daily newspapers in Texas, New Mexico and Pennsylvania from its partner Digital First. The partnership originally had been created between Gannett and MediaNews Group in 2005, with MediaNews Group taking the majority stake and management responsibilities.

In the recent transaction, Gannett bought Digital First’s 59.36% interest in the partnership in exchange for Gannett’s 19.49% interest in a California newspaper partnership and additional cash consideration.

The newspapers include the El Paso (TX) Times, six dailies in New Mexico and four in southeastern Pennsylvania.

In subsequent presentations to investors, Gannett has said it plans to be aggressive with acquisitions to grow the spin-off newspaper company.

The Mayfield Messenger had been owned by the Haskell family, which earlier this year also sold its daily in Martinsville, Virginia, to BH Media Group.

Mother Lode in Lodi
The Weybret family sold the 10,600-circulation Lodi (CA) News-Sentinel to a company affiliated with the owners of the nearby Marysville Appeal-Democrat and other newspapers in California.

The sale ends 56 years of ownership by Fred Weybret and his son Marty. Fred Weybret bought the newspaper in 1959, served as publisher for many years and was still serving as chairman at the time of the sale.

Alt Star Lineup
Star Tribune Media Company, owner of the Minneapolis Star Tribune, acquired the leading alternative in the market, City Pages. It is the first acquisition by the Star Tribune since Glen Taylor assumed ownership of Minnesota’s largest daily in 2014.

City Pages had been owned by Voice Media Group since 2012, when the company purchased a number of alternative publications from Village Voice Media. City Pages was founded in 1979 as a music paper.

The Star Tribune plans to operate City Pages separately from its metro newspaper.

The community newspaper group, headquartered in Broken Arrow, had been owned by Community Publishers Inc. (CPI) of Bentonville, Arkansas. These were the last newspapers owned by CPI, which earlier this year sold its newspapers in Missouri and Arkansas and printing operations in Missouri and Oklahoma to Phillips Media Group.

CPI, owned principally by members of the Walton family, was founded in 1982 with the purchase of the Bentonville (AR) Daily Democrat.

The Broken Arrow Ledger and five other newspapers serving the metro Tulsa area reach more than 30,000 households each week. The Tulsa Business and Legal News is published Monday through Friday.

Quill to Phillips
The Phillips family, which returned to publishing in the first quarter, added the West Plains (MO) Daily Quill in south-central Missouri to its company. The Daily Quill had been owned by the Martin family for nearly 70 years.

Phillips Media Group owns the Harrison Daily Times and Newton County Times in Arkansas, as well as several non-daily newspapers in the Springfield area of Missouri. In addition, Phillips has commercial printing operations in Missouri and Nowata, Oklahoma.

The Phillips family has been involved in newspaper publishing since the 1970s, and previously owned newspapers in Yellville, Mountain Home, Berryville and Eureka Springs, Arkansas, not far from West Plains. The new company is headed by Ryan Phillips, son of longtime newspaper owner Rupert Phillips. 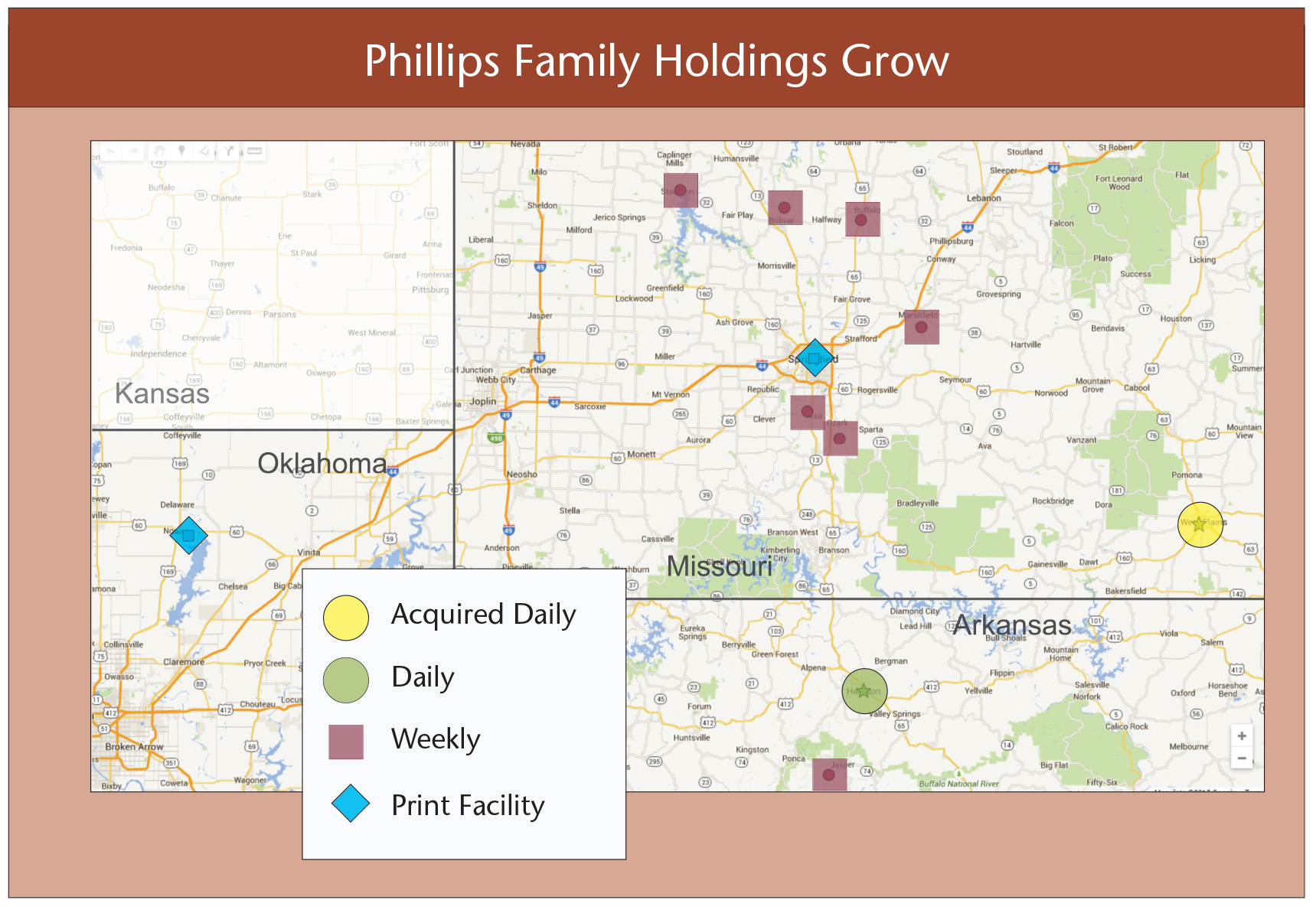 Maine Attraction
The owner of a non-daily newspaper group in coastal Maine acquired the Portland Press Herald and two other daily newspapers in Maine from hedge fund manager Donald Sussman.

The newspapers were sold to a company controlled by Reade Brower, whose midcoast group includes The Free Press in Rockland, the Courier-Gazette in Rockland, the Camden Herald and the Republican Journal in Belfast.

Sussman invested in the Portland-based group, which also includes the Kennebec Journal in Augusta and the Morning Sentinel in Waterville, in 2012.

Adams Adds in MD
Adams Publishing Group acquired a group of non-daily newspapers in southern Maryland from a Washington Post subsidiary to supplement its newspaper operation based on Maryland’s eastern shore.

The Adams Maryland operations are based in Easton, where it publishes the daily Star Democrat.

Other News
An affiliate of Boone Newspapers bought the non-daily Farmville (VA) Herald from the Wall family. Todd Carpenter, Boone’s president and chief executive officer, is principal owner of the affiliate that bought the newspaper.

Boone affiliates also own newspapers in Suffolk and Franklin, Virginia, as well as northeastern North Carolina.

Shaw Media acquired a non-daily group southwest of Chicago based in Yorkville, Illinois. The deal included four publications in the area.

The four community newspapers are delivered weekly to 60,000 homes and businesses in the South Charlotte market area.

McElvy Media also owns The Leader in the Houston market and has a management agreement to operate two other community newspapers in the region.