The Tale of Three Family Newspaper Owners: A look back as McClatchy heads toward sale to Chatham Asset Management

James McClatchy’s first newspaper job was with Horace Greeley’s New York Tribune just after he emigrated from Ireland. Seven years later, McClatchy headed west with thousands of others during the California Gold Rush. In 1857, James McClatchy published the first issue of The Daily Bee in Sacramento, California.

He once proclaimed, “the object of this paper is not only independence, but permanence.” McClatchy’s ownership of the Sacramento Bee, although ultimately not permanent, lasted more than 16 decades – the sixth longest tenure of ownership of a daily newspaper in the United States before its announced pending sale to Chatham Asset Management.

Two other families, the Knights and the Ridders, got into the newspaper business around the turn of the 20th century as well. Herman Ridder acquired the German-language Staats-Zeitung in New York in 1892 and Charles Knight purchased the Akron (OH) Beacon in 1903. The Ridder family began acquiring additional newspapers in the 1920s, as did the McClatchys. The Knights hopped on the acquisition bandwagon in the 1930s.

The companies owned by the Knights and Ridders became two of the first publicly-traded newspaper companies in the United States in the 1960s. In the 1970s, the companies merged to form Knight Ridder, the largest newspaper group in the United States at that time. In the late 1990s, Knight Ridder acquired the Kansas City (MO) Star and the Fort Worth (TX) Star-Telegram from Walt Disney Company for $1.7 billion, the largest newspaper deal up to that point. McClatchy quickly followed with their own billion dollar deal the following year when it acquired Cowles Media Company, owner of the Minneapolis (MN) Star Tribune.

McClatchy moved to public ownership in the late 1980s, although the family maintained control through a special class of stock. The company tripled the size of its business in 2006 when it acquired Knight Ridder for a purchase price of $6.5 billion in cash, stock and debt. Based on pro forma results, the purchase represented 10.2 times EBITDA and 2.1 times revenue. At the time, McClatchy said the EBITDA multiple was 9.5 times after factoring in adjustments.

McClatchy filed for Chapter 11 bankruptcy in February of this year, citing the burden of debt taken on with its purchase of Knight Ridder as well as legacy pension obligations. The bankruptcy process should come to a close within weeks, with financial firm Chatham Asset Management expected to be approved by the court shortly as the new owner.

New Jersey hedge fund Chatham Asset Management is acquiring McClatchy for $312 million, according to a purchase agreement filed with the U.S. Bankruptcy Court on July 24. Under the agreement, Chatham will acquire McClatchy for $263 million in a credit bid of the company’s first-lien debt, plus $49 million in cash and the assumption of additional liabilities. Chatham first invested in McClatchy in 2009. 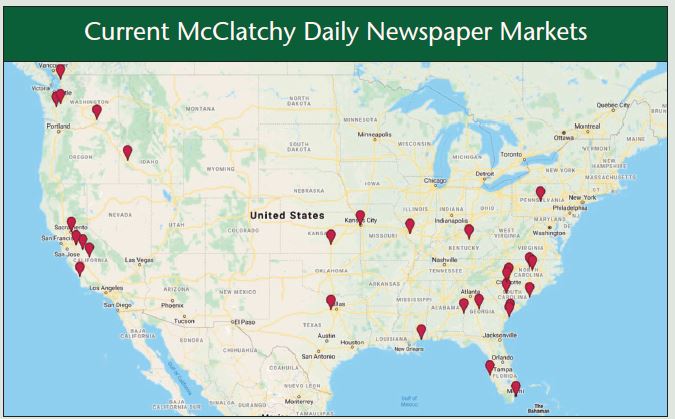